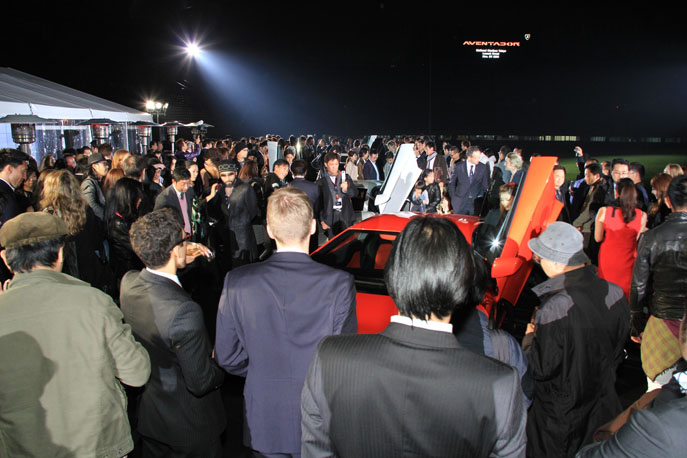 The new Lamborghini Aventador LP 700-4 made its formal debut in Japan yesterday, at a spectacular VIP event held at Japan’s National Stadium, well known as the venue for the 1964 Tokyo Summer Olympics. Stephan Winkelmann, President and CEO of Automobili Lamborghini, and Maurizio Reggiani, Director of Research and Development, attended the debut in Japan.

More than 100 journalists and 500 vip customers and guests watched a spectacular Aventador slalom race through fire on the stadium atletics track. In the build-up to the car’s unveiling, an Aventador film was projected on a stadium maxiscreen and concluded with the lighting of the Olympic flame. 120 Lamborghini flags on the tribunes celebrated the Aventador debut in Japan.

This event completes Lamborghini’s worldwide launch operations for the Aventador, which began with its global debut at the 2011 Geneva Motor show. The show was followed by a dynamic international launch in Rome and local presentations in various markets, with events in cities such as Shanghai, Sepang, Hong Kong, Singapore, Bangkok, Monterey, Miami, and Sao Paolo.

Mr Winkelmann commented: “We are delighted to officially launch the Aventador in Japan. Combining brutal power, outstanding lightweight engineering and phenomenal handling combined with peerless design, the Aventador LP 700-4 delivers an unparalleled driving experience for our Japanese customers. We maintain a very loyal and growing client base in Japan, where we already have more than 80 orders for the Aventador. In addition, sales of our Gallardo model in Japan this year are up a record 60% over last year. Japan continues to be a very important market for Lamborghini.”

The Japanese market and the entire Asian Pacific rim in general is a strategic business area for the Sant’Agata Bolognese-based company, accounting for more than a third of worldwide sales.

In Japan, Lamborghini has five showrooms in Tokyo (in Azabu and Edogawa), Nagoya, Osaka and Fukuoka. The company also boasts a total of 34 dealers in the Asian Pacific rim, with prospects for additional growth in 2012.

The importance attached by Lamborghini to the Asian region is illustrated by the announced creation of a second Lamborghini Blancpain Super Trofeo series in 2012, which will take place in China, Taiwan, Malaysia and Japan at the same time as the European competition.