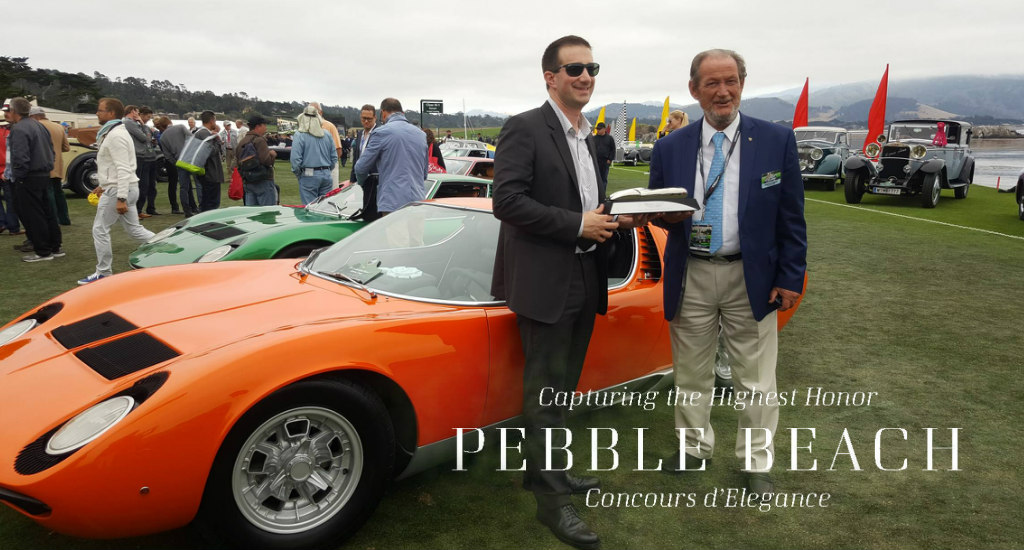 In its 66th year, the Pebble Beach Concours d’Elegance once again formed the stage of the most prestigious car event in the world. The 2016 event celebrated many notable historical automotive features, including 50 years since the Ford GT40 1-2-3 finish at LeMans in 1966 (these cars were among other winning GT40’s displayed on the lawn), and 50 years of the Lamborghini Miura with a great display on the concours lawn. 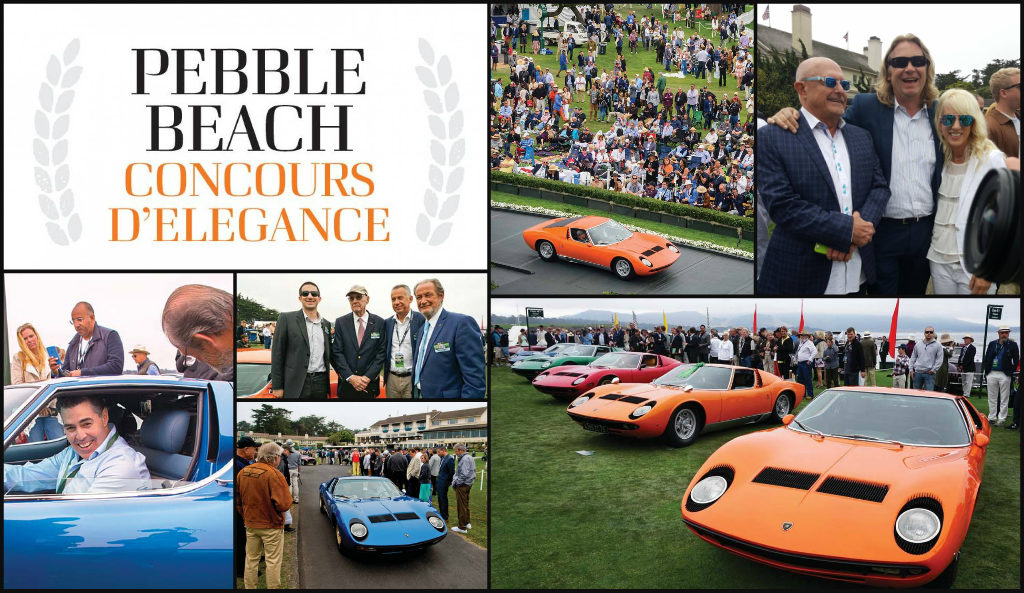 Jeff Meier’s Miura S is a well know very original and authentic example that has been shown at many events over the past decade, often winning top awards. Jeff bought his Miura in 2005 from Earl Morris of Oregon, who had owned the car since 1971. Earl originally wanted a new Miura, but could not get one due to the rarity of Miuras in the United States. So once a used one (just over a year old) came into the local Chicago sports car dealer, he purchased it. A few years later Earl retired and moved to Oregon, making the trip from Chicago in his Lamborghini Miura! In the more than 30 years that followed, Earl enjoyed the Miura ownership experience to the fullest, and although regretful, was happy to pass ownership onto another person passionate about the brand. Since Jeff’s purchase of the car, he has generously shared his passion for the Lamborghini brand by driving and showing the car as much as possible in his free time. His Miura has been shown a various events including Cars & Coffee in Los Angeles, Palos Verdes Concours in 2006, Concours on the Avenue in Carmel, the Quail Motorsports gathering in 2006 where it won the Super Car class, again at the Quail in 2013, Concorso Italiano in 2005 just after he purchased it, and again at Concorso Italiano in 2015 where it won best Lamborghini and therefore earned the famous Bull Award from the Lamborghini Club America. Jeff’s meticulous care of the car coupled with the originality and authenticity of it make it one of the best examples in the world.

Jerry Brubaker’s Miura S is another well-known example in the Lamborghini community, previously owned by the late club member David Walters of Hawaii. During his ownership David Walters did a no-cost-spared restoration of the car in 1998 which included paint by Junior Conway’s House of Color in Los Angeles. Junior Conway’s shop is considered to be one of the best (and most expensive) in the world, so Jerry’s Miura always stands apart from the rest. During Jerry’s ownership which started in 2011, he has continued to focus on the finest details of the car, making it an exceptional example. Earlier in the year Jerry showed his Miura at the Amelia Island concours where it received tremendous recognition and praise from fellow Miura owners as well as event participants.

Andrew Romanowski’s Miura S was purchased in 2012 from fellow Lamborghini club member Dr. Dale McCormick of Pennsylvania who had owned the car since late 1972—almost 40 years of ownership before selling the car to Andrew. The car had been imported from Italy in late 1972 when it was just over a year old for a celebrity who wanted an Italian super sports car, but once the car arrived it was too small for the tall celebrity to fit into, so it was available for sale. Once Dr. Dale McCormick saw the Miura while driving by the sports car dealership, he immediately pulled into the dealer and traded in his Chevrolet Corvette, and wrote a $20,000 check to make the deal.

A&A Premier Classics’ Miura SV, also known as the Polo Storico Miura SV since it was restored by the newly formed Polo Storico restoration department at the Lamborghini factory, is an example that wears an original green color that is rare on the Miura. Shown in this Verde Metallizzata (metallic green) with tan leather, it was shown at the 1971 Geneva Motor Show on the Bertone display next to the brand new Countach prototype—giving this Miura a very special history. The restoration began in 2015 at the Lamborghini factory, and was finished in 2016 just in time for the Amelia Island concours event in March.

Adam Carolla’s Miura SV, a 2016 restoration finished just in time for the Pebble Beach event, was shown in a beautiful and fresh blue color. The color Blue Medio (medium blue) was complimented by a blue leather interior and air conditioning—all factory options, and each rare for the Miura. (Approximately 62 of the 762 Miuras built came with factory air conditioning.)

The judging team consisted of class judge David McCarthy, and honorary judges Valentino Balboni (retired Lamborghini test driver) and Maurizio Reggiani (head of R&D at Automobili Lamborghini). According to the judges, the task of evaluating the cars was considerable work because they were all nice examples of the Miura model, but after taking careful notes and reviewing the five cars, the narrow margin point tally on the scoring sheet decided the outcome. Andrew Romanowski earned third place with his 1971 Miura S, A&A Premier Classics earned second place with their 1971 Miura SV, and Jeff Meier earned first place with this 1969 Miura S. In addition to winning his class, Jeff Meier was awarded the FIVA Post-War Preservation Trophy! The Historic Vehicle Association (HVA) awarded two Fédération Internationale des Véhicules Anciens (FIVA) preservation trophies at the 66th Pebble Beach Concours, one for Pre-War and one for Post-War. The FIVA preservation award recognizes vehicles that retain much of their original components, materials and finishes and as such are important cultural artifacts.